I’ve read that Netflix’s Single all the Way is the first gay holiday romance movie. (On Netflix? In the world?? I’m not sure.) Whatever, this is yet another example of Netflix choosing not to push the envelope.

The gays deserve better than this.

Peter (Michael Urie), a romantically-challenged plant-loving L.A. man (I think he’s in marketing or something), finds out his perfect boyfriend – whom he’s planning to bring home to meet his family – is actually married.

Not wanting to show up at home without that promised date, he asks his best friend/roommate (Philemon Chambers) to come with him and pretend to be his boyfriend (as one does). 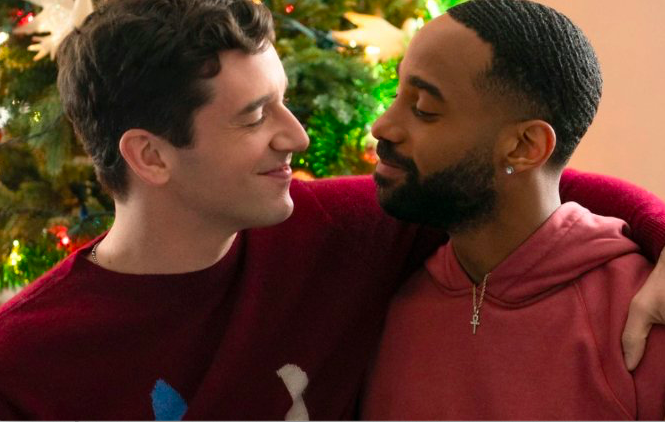 His friend, let’s call him Nick because I can’t remember his name, reluctantly agrees to this plan. (Edit: Turns out his name is in fact Nick.)

One thing I appreciate about this movie is that Nick has published a successful children’s book, yet he still works as a ‘TaskRabbit’. It’s probably the most realistic thing about this movie.

So, anyway, the two hop a flight to visit Peter’s ‘quirky’ family in… I want to say New Hampshire?? Definitely somewhere on the east coast of the U.S. (In romcom land, Christmas only happens on the east coast.)

But, before the pair can announce they’re fake-dating, Peter’s mother (Kathy Najimy) announces she’s set Peter up on a blind date with a ‘hot’ (Canadian hot, maybe) spin/ski instructor! So, the trope becomes secret-best-friend-fake-dating. That’s a first for me.

And oh, how the plot thickens! And the drama flies fast and furious!!

Will Peter and Nick reveal their fake dating status to his ‘quirky’ family? Do they truly belong together? Who will end up on what coast? Will the writers give Nick a personality at last? What will they do about his mother’s fake white Christmas tree? And what about the Christmas pageant?? And the shaving cream ad campaign???

You’ll have to watch to find out!

Okay, I’ll admit I wasn’t a huge fan of this movie, but I do get that it’s an important (and very restrained) step forward for gay representation in romantic movies. But Netflix, you can do better.

Single all the Way FAQs

What trope or tropes are used?

This is what we’d call a ‘friends to lovers’ romance. Well, ‘lovers’ is a stretch, since we only see them kissing once, and it’s not terribly passionate.

There’s also the ‘home for the holidays’ trope. And, maybe, ‘mutual pining’??

Is there conflict in this story?

Peter claims he never wanted to confess his (very well-hidden) feelings because he worried it would jeopardize their friendship. I guess that makes some sense, but it’s a pretty weak conflict to rest a whole story on.

Also, Peter wants to move back to… is it New Hampshire?? So that’s a potential problem for the relationship.

Is there romantic/sexual tension?

Apparently, everybody can see they’re in love!! Except the audience.

They never ogle each other, not even in a scene where Nick is wearing only a towel. There are no looks of desire. Ever. They really just seem like platonic friends throughout the movie.

This is a classic case of a movie telling us a couple is in love, without showing us. So, when Peter and Nick kiss at the end, it’s really a bit awkward.

But just how quirky is the family?

Well… The mother makes signs as a hobby and is reading a book about having an LGBTQ child. (Quirky!) The sister is… a bit crass? (Quirky!) The teenage nieces dress in mildly inappropriate mildly sexy outfits in one scene (Quirky!?). The father… Well, the father mostly just makes Nick do a bunch of chores for him.

Here’s my advice: If you’re going for quirky in a romcom, you’ve got to go full-quirk! None of this half-assed stuff! Alas, that would be far too risky for Netflix.

But guess what? Jennifer Coolidge is in this movie! You know, the funny lady from American Pie and Legally Blonde? That must up the quirk factor considerably, no? 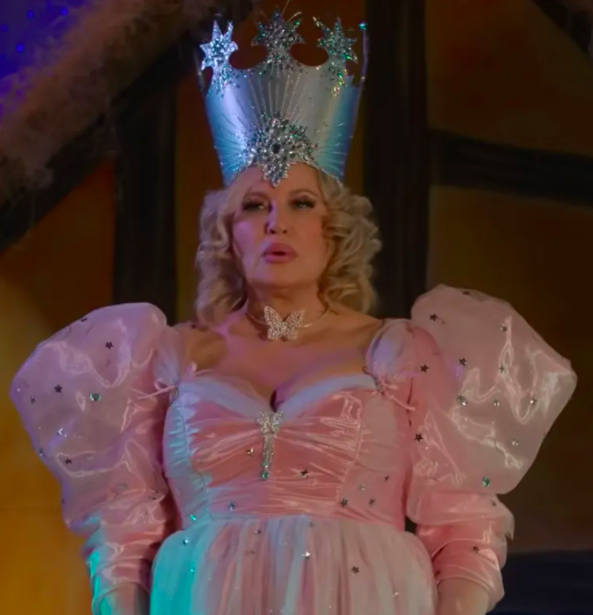 Unfortunately, no. I think the filmmakers hired her for comic relief, but forgot they needed to write her some jokes, too.

She serves no real purpose in the story, just swoons about, running the requisite Christmas pageant ‘yet again’, but is seemingly still kinda bad at it.

How could this movie have been made more romantic?

Well, for starters, we needed a bit more chemistry between the leads. I think a few well-placed secret longing glances would have helped. The beautiful thing about film is you can show those glances, those unguarded moments that must happen if one man is truly in love with another. But, alas, we saw none of that.

At one point in the movie, after their third date, the ‘other man’ invites Peter up to his place. Peter initially says, ‘Sure’, but quickly changes his mind.

I think this was a missed opportunity! He could have at least made out with the other guy! Then maybe that could have triggered the realization that he wanted real love, or maybe set off some jealousy in his friend. At the least, it would have added some much-needed drama.

To make this a drinking game, take a shot: